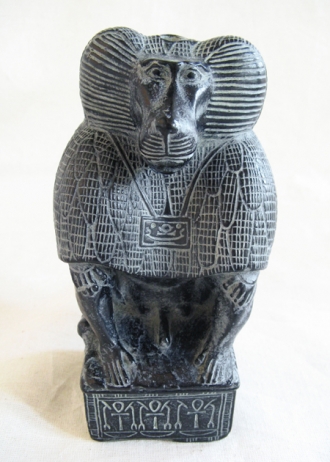 Formerly people from French Britanny used to think that Monkeys were the Devil's Creatures. Because the Devil was envying the Art of God who made the Man, he wanted his own poetry and made himself a Monkey.

Due to special ability of the Monkey for imitation ('mimesis' say snobs), it is true that one could give to the God of Music or Socialism a Monkey face. Maybe Aegyptian monkey-face God was close to Greek Dionysos, who is not far away from the Monkey too?

Darwin's Theory was important in new religious feelings of nazism inspirated by Roman paganism, and it is still important in today Liberalism to draw a kind of Scientific Futurist Edena.

We have 'Scientists'-as they say in France, such as Yves Coppens or almost hysteric Pascal Picq, who are closer to Religion than Science and never apologized because of their lies about 'Lucy', that was officialy declared to be their grand-grand-mother to young children during decades! Not to mention unbelievable lies of English R. Dawkins of the same Church, trying to hide that Isaac Newton is one of the most religious Scientist in European History, whose Science cannot be splitted from his Christian free-masonic ideas.

Great success of Darwin's theory in nazism and liberalism must be understood as very reasonable, due to its moral and political components. Religion and Politics are closer (not to say the same), although Science is very different from faith (closer to Charity, in Francis Bacon's idea).

THERE IS NO MATERALISTIC SCIENCE THAT CAN FIT WITH DARWIN'S IDEA; FROM ARISTOTLE OR DEMOCRITUS TO FRANCIS BACON AND KARL MARX, DUE TO STATISTIC REFLEXION OF DARWIN. Therefore one can say that there is no materialistic Science that can fit with physiocratic principles of nazism or liberalism. Organ is the domain of Satan and his clerks, and materialistic Scientists are studying it as the domain of Corruption, especially when they are Christian as Francis Bacon, but Aristotle too.