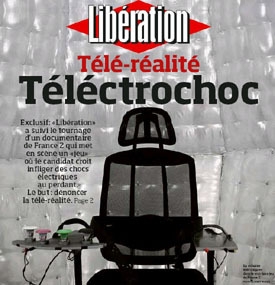 Coming soon on French TV (end of March-"France 2" Channel), a new Reality show in which French people are acting as real Torturers with Electricity. Not less than 80% of the Candidates, discovering at the end of the Game only, that the Torture was not real but the victim an actor, shouting although like a real Guantanamo prisoner. Christophe Nick who had the idea of this program wanted to underline the slippery slope of some Reality-shows that -he said- one can see overseas, notabily in Great-Britain.

This allows me to continue two rather different ideas that I am arguing about on this weblog since (too) many years after French philosopher Simona Weil and her main work on socialism dictatorship and oppression (more useful than Huxley, less acurate than Karl Marx).

- First idea: Compared with today Politics, former Nazism was just more frank, what probably partly made its faster End. Probably it is special French ability to recognize frankness? Of course, I am able to prove to anybody against it that Hitler's liberalism is nothing else than ordinary liberalism, regarding to Metaphysics, Science or Economics on which nazism is based on.

- Second idea: Special today hypocrisy is made by the Press and the Networks under the control of the Industry (with no exception in France). With football, Olympic Games or idiotic TV-series, they maintain people in their stupidity.

Due to our virtual/judiciary Culture that is condemning criminal intentions for prevention, candidates of this Reality-Fake Show should be indicted, not thanked by Christophe Nick as they are! A Jewish woman who played the torturer in the Game does explain that she did not understand why her grand-parents did not refuse to have a yellow star on their clothes. Stupidity is for sure part of the crimes of nazism little civil servants!

Intention of committing a crime should be condemned here as an example as it is usually. Or the French Channel and Christophe Nick should be instead! It sounds maybe crazy. But ask yourself if the law is not the craziest. Listen to this: Not prosecuting those people or the Channel would be justified by the same reason that made the Candidates act like real torturers, obeying to the order of the Game Master. Because they believed TV is benefiting of an Injustice!

Therefore Christophe Nick's scientific basis is wrong. He is based on Milgram's sociology studies to explain that 80% of the people would commit acts of torture as those candidates. But Sociology is not a Science, this is the religion of a Socialist State or Politics! I could reply Mr Nick that no one of my friends would be agree to participate in a TV-Show! He is starting from the fact that every French people is venal or narcissic.

TV is Propaganda, not only TV-shows. We had recently the proof of it in the general agreement of the US-Citizens for Irak's invasion though lots of US-Citizens do not even know where Irak is located. French example is better proof because French people were first time manipulated by TV FOR Irak invasion, and a few years after AGAINST.

Problem of Sociology seen as a Science is not as anodyne because Sociology is the heart of darwinism and Nazism already, which has a physiocratic background as every kind of liberalism (For marxist science, statistics are against History; especially Milgram's use of statistics.)