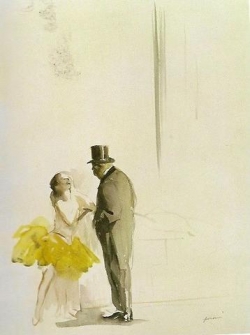 'Woman's Day' in France today. Will this Bourgeois Carnival of Hypocrites never end? There is no advantage that French Women got during these last decades which was not the result of economic capitalist transformation.

Even the franchise for women was decided by the most conservative President of the last sixty years Charles de Gaulle who was thinking that women would be more conservative than men!

Stupid old French feminists are surprised that younger women do not care of their Sexual Feminist fight. Is Selfishness the sole Ideal that a woman can have?

For French philosopher Charles Fourier (1772-1837) who did inspired Karl Marx, prostitution is the back of marriage and marriage is the back of prostitution; and in fact the prostitute and the married women can thank themselves because they are depending on each other. Prostitute woman is able to admit it easily, knowing where her customers are coming; though respectable woman does prefer ignore this truth.

Capitalism change during these last decades, women at work first of all, changed the status of both prostitute and 'respectable woman', abolishing the clear fronteer which was between them before. 'Love-match' is the result of the same transformation, well illustrated by the fantasy of Pretty Slut Julia Roberts, success story that would have make people laugh in XIXth Century because ot its roguish prank.

Abortion Right is due to it too: no Feminism here but Economy. The Law freeing Abortion was even decided in France by the more Rightwing Conservative Party which does partly explain that Catholic Roman Church did not reacted to this Law against children, not more than Lutherian, Jewish and other Churches.

Interesting point here is the confirmation of Marxist History. Fight between Classes is ending says Marx in Europe around 1850 (due to globalization). French Louis-Napoleon Bonaparte was elected by French people who were not belonging to the same class. Economical interests that were before different are more and more common from 1850.

Feminism is an example of a common ideology that is today shared in France by the higher class AND the middle class that is just repeating what it is teached and repeated in newspapers. Feminism is part of a common religion. Young immigrants living in the suburbs are the only not to share this common stupid religion entirely made by Female stupid magazines depending from the Industry and the Banks.

Women are often praising the politics' or the society's benefits against the today evidency of its bankruptcy. But Feminist women are for sure the most devoted women of female gender. See a difference between hysteric Nuns and Feminists women? I do not.