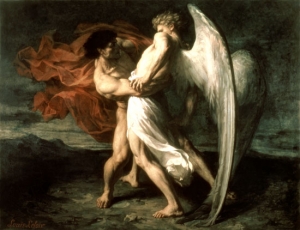 French journalist Jacques Duquesne wrote a book about the Church and the Devil, demonstrating that Catholic Church got rid of him last Century along. And in fact advertising for the Devil is more in rockn'roll Lyrics or Hollywood movies now than in Christian Churches.

This turn is for the author Duquesne a progress toward more Responsability:

- First thing to say is that the reflexion of Duquesne is out of Christian tradition or explanations though this man does like being called a 'Christian' or even a 'Papist' to sell more books. One cannot be 'Christian' and not believe what Jesus says. Religion of Duquesne is Capitalism and he worked in fact during decades for Newspapers praising capitalism, not Jesus. Responsability is starting with the fact not to mix capitalism with the Christian praise of poverty.

- Idea of a 'bigger responsability' would be funny if the sense of responsability of capitalist Politics was not illustrated by rivers of blood due to the struggle between huge States until War along last century.

But this Publicist is not responsible of the vanishing of the Devil in most Christian Sermons or Theology. German Christian Theology where Nazism and 'existentialism' came out enable to understand this changing. One can summarize it under the name of 'Anthropology'. This mechanic that one can find in E. Kant philosophy, S. Freud too, or in nazi Heidegger more recently does enable to change the Devil in a moral value: he becomes 'bad' principle when God is becoming 'good' principle. Understand that this anthropologic turn is as much swallowing the Devil than it is swallowing the Nature (The idiotic turn of Ecologism when Earth becomes one human's soul is included in this philosophy), a 'Nature' which is understood here as it is in the Latin Paganism as 'elements'. Greek idea of Nature that does infirm Latin idea of 'elements' brakes anthropologic reflexion and does explain why lots of Greek scientists did believe in the Devil (Apollo) as true Christian.

After Shakespeare or Francis Bacon who are in the Christian materialism tradition inspired by Greek Science*, one can think that Christian satanism is summarized in what it is sometimes called 'Natural law', idea which was invented by stupid middle age monks, betraying Aristotle on this point (who did not wait for A. Einstein to know that laws are submitted to relativity principle. Not even Zeno waited for German simpleton Einstein or French Poincaré.) Christian free-masons such as French J. de Maistre in XIXth are not far away from this idea of 'Natural law' too. One can especially read in French poet Baudelaire, who was following de Maistre, that he is not clearly making the difference between God and the Devil, as he is admitting frankly.

Not difficult to understand that nazism or darwinism are continuing this middle age idea of 'Natural law' too. It is Satanic principle for Christian because this is the way to change Politics in a sacred matter against the warning of Jesus not to try to make his Kingdom in this World.

*Pythagoras is closer to religion than science and therefore closer to Aegyptian than Greek. Due to pythagorean symbolism of swastika, one can see satanism in Pythagorean Science.