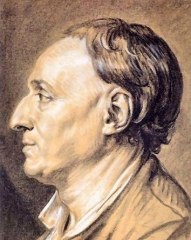 I am upset when I listen to a bad teacher explaining that French philosopher Denis Diderot (1713-1784) was a materialistic Philosopher. He is probably the less materialistic of the French XVIIIth century philosophers (due to a very religious provincial education). Same mistake with English Isaac Newton who was very religious too, and never joined atheist faith as Diderot (English 'Scientist' Richard Dawkins is not a Scientist but a liar.)

The less materialistic was Diderot, i.e. 'the further from English Francis Bacon' who partly inspirated French philosophy at this Time (but less than Karl Marx science later). Diderot was therefore friend with French J. le Rond d'Alembert (1717-1783) whose Science has nothing in common with materialistic Science of Bacon. Just French Dummies can think that Mathematics have something to do with materialistic science!

Throughout History, it is not possible to draw a fronteer between Atheism and Materialistic thinking on one side, and Faith in God and Animism on the other side. Opposite to the Boeotian idea (=ignorance/nazism), best example is the difference between Greek and Roman. First one were both more materialistic and less Atheist than Roman people after them (Most interesting is to understand that Roman people were more religious than Greek, which allows to understand that religion and faith are two different things. French philosopher Simona Weil is interesting on this point because she did not want to belong to Christianity, in Spite of her faith in Jesus, because Christianity had became just a religious idea at her Time, a kind of social cement.)

The Hate of the scientific Truth, part of Capitalism which is growing on Ignorance, is very well represented today in Universities, that can be regarded mainly as religious schools.